What is Hearts Against Heroin? 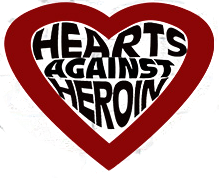 Hearts Against Heroin is a community initiative developed by Forever Media in Johnstown. The program was developed to help combat the alarming number of overdoses across our region by raising awareness, focusing on education, and demonstrating a unified effort with the CCDC to put an end to opioid abuse.

Hearts against Heroin is made possible through underwriting support of Somerset Hospital and Conemaugh Health System, along with Spangler Subaru, Yeager’s Heating Service, 1st Summit Bank, and Martin Baker America.

Part of Hearts Against Heroin's campaign for awareness is a sticker donation. By displaying the sticker on doors, windows, and other locations, you can show your effort in stopping the use of heroin in our area.

Proceeds benefit the Cambria County Drug Coalition, and you can pick yours up at the Crossroads Cafe.